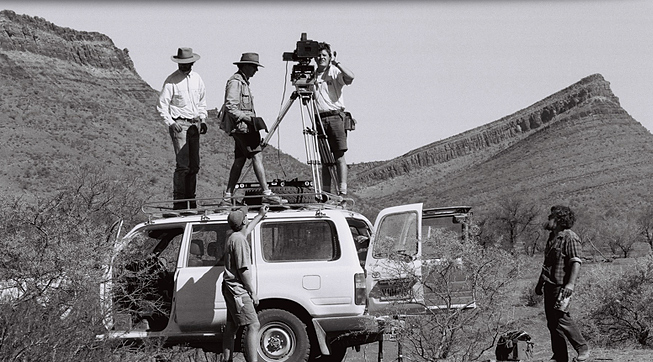 When investors put their money into a film, their investment is safeguarded by an insurance company called a Completion Guarantor, who guarantees completion of a film to a technically acceptable standard with the available funds (or they will kick in the extra funds if that's necessary).

As part of the Guarantor's supervising process, the production has to send in Daily Progress Reports, which are more in the manner of a sheet of figures, names and calculations, showing what scenes were scheduled, what scenes were shot, who was in them, how much footage was supposed to be shot, how much footage was actually shot, how many shots were done, what duration was shot, what duration was what was shot estimated to have been before it was shot and found to be something different, and so on.

On "Epsilon", however, the Guarantors had some problems with our project: we had no script to measure anything against (it was being written as we went); we were employing a radical shooting process (the whole film shot on motion control) that almost no one in the world could understand; and the usual definition of "shot" was meaningless in terms of anything we could report (by one definition, the 'shot' we called 'Around the Mountain' occupied something like 24 shooting days for five takes). .

But there were positives for them too. We had budgeted a year to shoot the film. There were only two actors in it, and both would be on set at all times, so it was very easy to switch from one thing to another, as need arose. And we were a tiny crew, meaning each extra shooting week was very cheap, and we were unlikely to ever go out of control in a major way.

We came to an agreement with the Completion Guarantors that I would send narrative reports to keep them up to date, and we wouldn't bother to try and make sense of all the other things that are normally reported on. If I had a sense that anything was going awry with any of that, I was to report that.

What follows in Part B are the surviving narrative reports to the completion guarantors, a weird sort of a diary of a shoot. They're instructive and revealing, in their own way. What they don't reveal, though, is the truly extraordinary scope and extent of the shoot: in the magnificent Flinders Ranges of South Australia one week, off the USA the next; back from America and it's immediately a drive from Adelaide to Broome and the Kimberley, then a drive down the Western Australian Coast and across the Nullarbor; into the Centre, where Burke and Wills died and you can understand why; Tasmania, the Victorian high country...it was an amazing, amazing shoot, a truly wonderful process.

After seven months of the shoot, I had cause to phone the Completion Guarantors. We had had technical trouble during our previous trip away, and had just found out we'd achieved only two useable shots in the whole of the previous month. After seven months, we had only sixteen minutes of screentime. The first ten minutes of the film alone had consumed 64 shooting days (a whole film in Australia is usually done in 30 to 35). At that rate, it would take us three years to shoot the film.

But I told them not to worry, that everything felt to me to be under control. We'd learnt a lot about this sort of filming, and had ironed out most of the bugs. There were some easier shooting locations coming up. I knew where I was with the script now, and could begin to write ahead. I asked them to be patient and to have confidence.

They must have taken a deep breath about then because they said, okay, keep us informed. I guess because it was a unique situation, there was not much they could do other than pull the plug and pay back the investors, but because of my confidence, they felt continuing was the least bad policy.

Things did change. There was a sequence on the next trip away where we programmed for a week, then flew in an extra clapper loader (loads the film magazines) because we knew we would be shooting so fast. We shot between sunset and nightfall, a window of 45 minutes, on two consecutive days, for sixteen minutes of screentime of some of the most complex pre-CGI opticals ever achieved, anywhere in the world.

It was, indeed, the most extraordinary of shoots, and even though the film disappeared in almost equally extraordinary circumstances and none of us had anything to show for it, it was a year of our lives that was deeply worthwhile for its own sake.