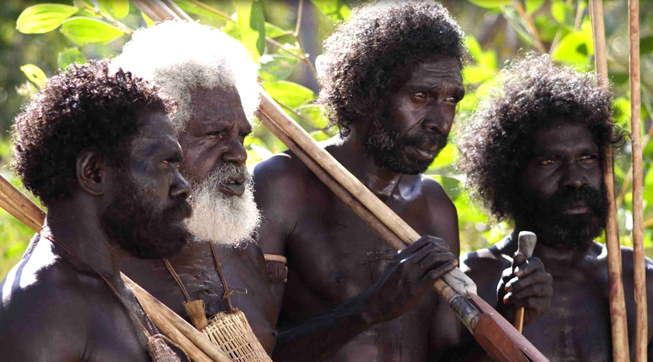 Ten Canoes is a feature film that was shot on and around the Arafura Swamp in north-eastern Arnhem Land in the Northern Territory of Australia. It is unique in that it is the first feature film to be shot entirely in Aboriginal language (predominantly Ganalbingu).

The entire cast are people indigenous to the swamp region, mainly Ganalbingu and related clans, who are also responsible for the making of all the traditional artefacts needed for the film, such as the swamp-specific bark canoes, the spears and other weaponry and the dwellings. Indigenous people from the area were involved at most levels of the production, from input into and editorial control of the script to the casting and selection of locations.

When the film had its world premiere at the Cannes Film Festival in 2006 (where it won the Jury Prize in the Un Certain Regard selection), there was an outpouring of emotion from those of the cast who were there...their culture, their ways, and all their hard work had been recognised and validated.


It is the distant past, tribal times. Dayindi (played by Jamie Gulpilil, son of the great David Gulpilil) covets one of the wives of his older brother. To teach him the proper way, he is told a story from the mythical past, a story of wrong love, kidnapping, sorcery, bungling mayhem and revenge gone wrong.

In English storytelling and subtitled Ganalbingu language, this is a film unlike any you have ever seen.

The film spawned a number of related projects, most notably the television documentary The Balanda and the Bark Canoes (also known as Making Ten Canoes) and the website www.twelvecanoes.com.au, which itself spawned a cinema version of its main stories, which has played at film festivals around the world.

Written by Rolf de Heer with the people of Ramingining