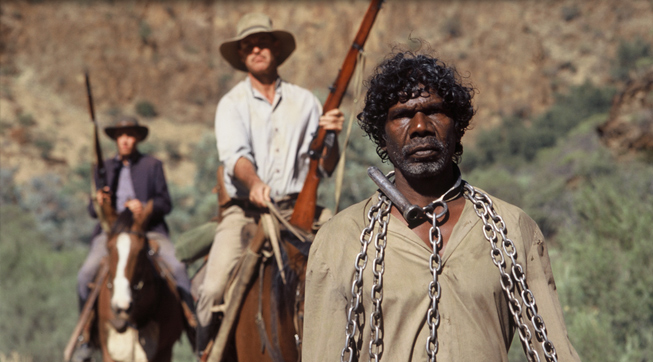 The Tracker is a unique collaboration between artists in different media...film makers, a painter, music and recording artists. At its world premiere at the Adelaide Festival of Arts, the film, playing with a soundtrack of dialogue and effects, had its scored music, including ten songs sung by Archie Roach, played live to the picture, whilst in the foyer was an exhibition of the paintings that form part of the film's imagery.

But the content of the film proved equally ground-breaking. A few days later at a gala screening in a large country town with a reputation for racism, the writer/director was spat at as the audience left the cinema...the film's politic was unacceptable in those parts.


There are four of them making their way through the wild country, tracking relentlessly. It is 1922.

In charge is the Fanatic, cold, ruthless, calculating but complex. The second of the three whites is the Follower, a greenhorn, new to the outback. And there is the Veteran, a thinker rather than a doer. But the real leader, whether the others know it or not, is the Tracker himself, a mysterious figure who clearly isn't who he seems.

They are half a day behind the Fugitive, a black man accused of murder. Tension rises; the whites sense a hostile black behind every tree. They surprise a small group of bush blacks, and the subsequent interrogation session turns into a small massacre.

From that point the expedition falls into increasing disarray. The packhorse is speared, out of nowhere. The men begin to argue and suspicion falls on the Tracker, who is chained for his impertinence.

Then the Veteran is speared. His wounds slow the party's progress, and at camp during the night the Fanatic, thinking he is unobserved, sends him "to that undiscovered country from whence no traveller returns".

The pressure mounts. There is an 'accident', wherein the chained Tracker almost causes the death of the Fanatic. The Fanatic's horse is speared. The Follower threatens the Fanatic with death when the Fanatic begins to randomly shoot a group of aboriginals.

When the Follower wakes in the morning to find the horses gone, the Tracker unconscious and the Fanatic hanging from a tree by his own chains, he reckons he is a finished man. But he reckons without the Tracker.