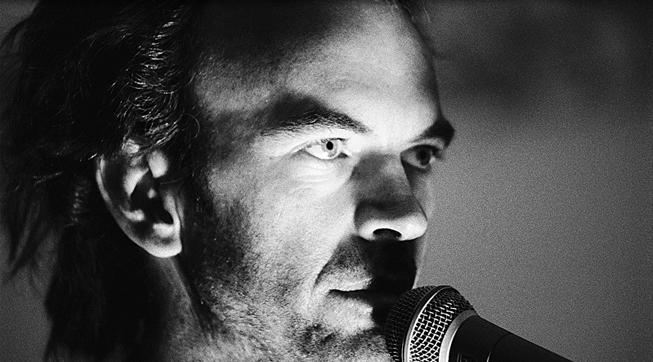 After I graduated from Film School, I never had the expectation that Hollywood would come knocking at my door. My expectation was that any film I was to make would have to be generated by me.

One day, a couple of years after graduation, my friend Ritchie Singer, then an acting student at the National Institute of Dramatic Arts (NIDA), and I were discussing this notion. We thought we should devise a low budget film for the two of us to do together. I had the sense of how to do it, and the two of painted the broad brushstrokes of what it might be.

Ritchie had recently played the character of Dodge in Sam Shephard's play, "Buried Child", for his second year NIDA play. It had been an extraordinary, transforming performance, Ritchie being unrecognisable as the old man, on stage from beginning to end. And certainly a number of people who knew him well said to me, at interval of the performances I saw, words to the effect of, "I thought Ritchie was meant to be in this play..."

So Ritchie playing the lead role in this film, plus his playing of an old man, were our starting points. But cinema is much less forgiving that theatre, and there was no way we'd get away with Ritchie playing the character of an old man on film, which is where the notion of Bubby copying Pop in the film comes from (and, from that, the copying of much else in human behaviour).

Over a period of about six weeks, Ritchie and I met a number of times, and discussed possibilities and ideas for the film. But good ideas abound...it is the execution of them in a satisfactory way that is rare, and difficult. What we needed was a script.

The Film I Was Going To Make

I began to work on the script having some idea of what I needed to achieve. The film was going to be made on next-to-no budget, and to achieve that on 35mm film, I was going to have to have a convincing plan on how to do it. My plan was as follows:

- Write a script, then organise a number of Film School graduate friends to help me make it.

- I knew someone, a film maker called Tom Cowan, who owned a 35mm camera, and I felt certain he'd lend it to me if I asked.

- I worked out that it would take us the best part of two years to shoot, maybe more, and that the only things I could rely on were Ritchie to be there whenever needed (he had profound motivation) and for Tom's camera to be available to me one weekend every now and then, even though I hadn't asked him yet.

With this plan in mind, I began to work on a script, but stopped at short order when I realised the implications of my grand plans...even though Richard Michalak was meant to shoot it, if he got a film elsewhere, he might not be available, and we'd have to get someone else, and then things would look different. In fact, it may be that there would have to be a number of different cinematographers on this film.

Problem...solution. Turn the weakness into a strength. Lock Bubby up away from any influences from outside, no television, no radio, no books, no pictures, nothing. Then when he gets out, everything is what he sees for the first time, and it can look like anything at all, and in fact the more different it looks, the better. Having different cinematographers then becomes an advantage, rather than a problem. And you can have all these separate little film shoots, all looking different at different locations, and that becomes the film.

It seemed like a good idea at the time.

The Film I Was Never Going To Make

I began to carry index cards with me, everywhere I went. I'd see something and I'd make a note on a card, or I'd see something more elaborate (like a bag-snatching man in a wheelchair) and I'd write it down as a little scene, or I'd adapt it or modify it in such a way that it might be able to be used.

Over the months, my stash of cards grew. But then life, in the form of a film, interrupted. "Tail of a Tiger" was financed, and the script of "Bubby", as it was then, languished, for a year or more.

Having now made a 'proper' film, the idea of making one over a period of two years, out of my own pocket, seemed almost preposterous, and most unlikely to ever happen, but I nevertheless worked sporadically on "Bubby", even mounting some of the cards on a wall and beginning to make sense of them.

Having been released from the imperative of making a film from the material, I could be, for me, quite daring in the material I chose to allow to come to the surface of my imagination. I felt the exercise of writing the script was still worthwhile, that I'd learn quite a bit from it. And it was, without the pressure of any deadline, quite a fun project to be working on.

The Script I Was Never Going To Write

Eventually life intervened again, and "Incident at Raven's Gate" was financed, to be entirely produced 2000kms away. I packed the cards of "Bubby" into a box and moved temporarily to South Australia. It was two years before I was to see them again.

When in 1989 I moved permanently to South Australia, I set up an office and tried to make myself feel at home and busy, even though I had nothing particular on the horizon. The familiarity of the "Bubby" cards made them a welcome addition to the wall decorations.

I'd decided way back, and Ritchie and I had probably talked about this too, that for the film to have any traction as a micro-budget film (in an era when these were almost unheard of), it would have to be pretty "out there". When two years after putting them away I looked at the cards again, all the "out there" ideas that I'd had, had been with me, in my head, for two years...I'd grown completely used to them as being normal, so that when I looked again at them, I was surprised how lame everything was, how little potency any of the ideas had. If I was to do any more work on this, then I'd certainly have to ratchet up the power.

By now, though, my 'career' had a different trajectory. Hollywood had come calling, in the form of agents from CAA and ICM and Walter Partos, and offers were coming my way. Nothing much appealed to me (particularly not the agents from ICM and CAA) as almost everything on offer was gratuitously violent or exploitative in some form or other. And, not liking Los Angeles at all, it was going to take something pretty interesting for me to want to work there.

But with a perceived career trajectory comes a different mindset, and "Bubby" became the script I was never going to write. Every so often I'd fiddle with something or another on the cards, exploring ideas or the way of executing these ideas, but that was enough.

The Script I Wrote

Then life intervened again..."Dingo" was financed and, with great difficulty, made. At the end of it, I'd directed a film which cost me a great friendship. It also left me largely broke (we'd had to rescue the French side of the co-production because having failed to deliver the full amount of the promised finance, they threatened to pull the plug two weeks into pre-production if we didn't "invest" our fees into their side of things), and it left me with a film that had quite some credit, but that went nowhere all the same.

This meant working entirely on my own material. It meant controlling as many parts of the film's process as possible, which in turn meant working low budget. The bigger the budget, the greater the angst by other producers about the money, and that when they don't usually know what they're talking about anyway.

I needed to get hold of some money, and the best way was to apply for some script development money from the local funding body, then FilmSouth. I looked at what I had, and the thing that was closest to being able to be turned into an application (rather than a script) was "Bubby". I spent a day or so on writing an outline from what I had and fired of an application, which was successful.

I now had to write a script. I still had no intention of making the film from it, but in eight weeks I was supposed to deliver something. I worked for some weeks, turning the cards into a script. Half way through, I started to get a feeling about the material. I thought that maybe it could be made after all, and then I worried about whether, more than ten years later, Ritchie would still want to do the part.

I sent Ritchie the first half of the script. He read it, and we discussed on the phone how literally he should take everything that was written, or whether it would be toned down in the shooting. I didn't know, but I said he should assume that it was going to be made as written. Ritchie pondered, but felt he really had no need to go to places as dark as where that script would take him, so he declined the possibility of being Bubby.

In continuing my writing, I now needed someone else to picture in the role. I'd seen a local short film some three years earlier, Tim Nicholls' "Confessor Caressor" and I remembered well the performance of Nicholas Hope in it. I made an almost anonymous phone call, simply to establish whether Nicholas was still around, and in no time had Nick on the phone to me, asking what I wanted. In for a penny, I thought, and Nick came in to the office and read that first part of the script. And, of course, he wanted very badly to read the second half, and he wanted very badly to do the role.

Having someone in mind for the role, I could now continue with the script. I completed it in good time, put it away for a couple of days and read it back. I was shocked. I was shocked by the script, by how loudly and powerfully it spoke. I was shocked by some of the material...I'd read a scene and wonder, "Where did that come from?!", and I'd have no answer.

The script was, for me, compelling, as a project it was compelling. I began immediately to make preparations to try and finance it, because I wanted to make it. But that's another story, for another time.